Lily Donoghue is an American famed star who is better known for her portrayal as Marty in the horror and thriller movie “Black Christmas”. From 2017 to 18, she played the character of Jamie Weisman in three episodes of the ABC comedy series “The Goldbergs”. In 2019, she appeared as Young Brenda in the comedy series “Jane the Virgin”, which aired on CW. Recently, she worked as Jorie in the Jason Isaacs starred drama film “Dr. Bird’s Advice for Sad Poets”. 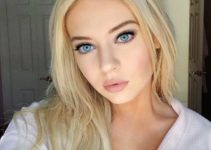