Samy Zipser is an American teen actor who is well known for his portratal of Jack Reynolds in the 2020 short film “Little Man Jack”. He began his acting career in 2019 with short film “The Dinner”. Although, he began acting in a Student commercial at The Ringling College in Sarasota, Florida. In his acting career, he has been cast in number of short movies including “Veil of Shadows”, “Code: Magenta”, “Think Big, Shop Small” and many more. Recently, he appeared in the comedy and thriller film “Twas the Night”. 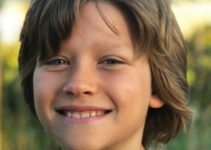