Gino Cosculluela is an American dancer. He is widely known for appearances on the reality shows America’s Got Talent (2012) and Dance Moms (2012-16). He danced for both Candy Apple’s Dance Center and once for the Abby Lee Dance Company during his time on the show. In 2019, he featured as a dance contestant in the reality show “So You Think You Can Dance”. In addition, he also appeared in the Little Steven’s music video, “Love Again” ft. The Disciples Of Soul. 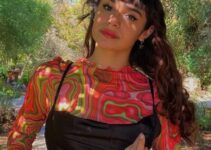