Micheál Richardson is an American famed star who is best known for his lead roles as Henry Richardson in the romantic film ‘Entree Des Artists’ and Jack in the comedy-drama film ‘Made in Italy’. Previously, he was cast as Renny in the Brett Cullen starred action and mystery series ‘Big Dogs’. He began his acting career in 2013 with Adam McKay-directed film ‘Anchorman 2: The Legend Continues’, in which he portrayed the small role of a History channel reporter. 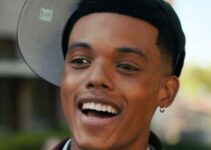